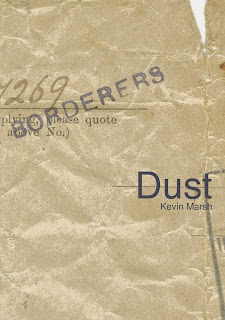 This is an extract from 'Dust'. It is taken from the chapter entitled 'Saturday 25 September 1915'.
'Dust' is the story of one young working class man, almost invisible to history, who died on the first morning of the Battle of Loos. Nothing of him was ever found.
One photograph and three hastily scribbled postcards written a few days before the battle are all we have to begin to tell his life.

***
It is 5 am.
The rain of the past two days, at times torrential, has eased to a thick drizzle. The earth is sodden. Water lies in pools in the pocks and tracks in the open land. It covers the bottom of the trenches. It is ankle deep. There is barely any wind.
There is no silence. For almost 100 hours, British guns have tossed tons of high explosives and shrapnel onto German lines. Those lines are no more than 400 yards from where Lance Corporal James Airton is standing. Sitting. Leaning. Talking. Waiting.


It is 5 am and no-one knows what is to happen next.
Perhaps the first plan. Perhaps they will release thousands of tons of chlorine gas into the still, damp air. The ‘utility’. The ‘accessory’. Perhaps a five mile line of 60,000 men will rise as one out of the trenches to charge and slide and slip and fall in the dense clay.
Perhaps the other plan. There are two plans. Perhaps they will not let the gas go. Perhaps just 20,000 men will do what they can along a shortened line of two miles or so. Their flanks naked to the German machine gunners. Knowing they cannot do what their orders say they must.
It is 5 am and the biggest infantry battle in the history of Europe is perhaps an hour and a half away. Or perhaps it is not. Perhaps it will not happen at all.
Jim and the rest of the 6th Battalion of the King’s Own Scottish Borderers have been back in the front line trenches for less than 24 hours.

It is 5 am. Now they are in the front line. Waiting. If they are to go, theirs will be the hardest task in this unwanted battle.
Jim and his battalion hold the section of trench that cuts the road from Vermelles to Auchy Les Mines. Or what remains of them. A man foolish enough to peer over the parapet would look north east. Some 400 yards away, the German front line trench. The Madagascar Trench.
Straight ahead, the battalion’s first obstacle and objective. ‘Mad Point’. A machine gun post that controls the Vermelles-Auchy road and stands in front of the remnants of Madagascar village, the Corons de Maroc and Corons de Pekin. Their exotic names belie their drab reality. Smashed shells of what were once rows of miners’ terraced houses.
To their right, one of the strongest strongpoints  of the German front. The Hohenzollern Redoubt. It bulges 600 yards from the German line. Its nose no more than 250 yards from the British line. It is a fortress with innards of steel and concrete driven onto and into a low slagheap that for all its modest height dominates the low, flat, sodden land around. Its surface a bristling skin of half buried machine guns. They have an uninterrupted, 270 degree field of fire. Behind them, a rash of trenches speed ammunition and reserves to the front. No-man’s land here is “as nasty a bit of ground as any on the battlefield”.

***
It is 5 am and no-one knows what is to happen next. It depends on the wind. Partly on the wind.
Gas is a gamble. A grim game. An aetherial game of chance. Gas  debilitates, demoralises and destroys. It destroys, burns and corrodes men and machines. But it can not be aimed. It is the caprice of nature that decides whether it kills, blinds or burns your own men or the enemy. The strength and direction of the wind. The only moment of human control is the moment of decision.  Whether to open the taps or not.
It is 5 am. Jim waits. Waits for that decision and all that will follow.
Gas can not do all that artillery can. It can not uproot and cut the tangles of barbed wire that slow or halt an advancing soldier. That force each man into a high-stepping, macabre dance. That turn him into a standing target. Nor can it excavate the booby traps, the pits lined with spikes.
***
It is 5.40. Haig persuades himself the wind is stronger. The leaves of a poplar tree whisper in the lightest of breezes. It is, he decides, ‘satisfactory’:

At the northern end of the line, next to the La Bassée canal, facing Auchy les Mines, the air is still.
One of the men whose job it is to release the gas hesitates. Another man, a senior officer, hesitates, too. He wants to stop the release. He calls Divisional HQ. He tells General Horne:

“The wind is unfavourable and I don’t think I should release”,

“The order is to turn on the gas”

The officer tells General Horne that the man whose job it is to turn on the tap is refusing to do it.
Hornes’ final words are curt:

“Then shoot the bastard”.

***
It is 6.30 am. The noise is unbearable. However much we try we can not imagine it or anything like it today. The closest is an intense spell of sheet lightning but that is a pale, temporary imitation.
There is the smell of wet earth. Of shit and rot and death. Of burnt explosives. Of smoke and gas.
It is 6.30 am. Whistles blow. Along the five miles of the line. Their shrill soprano cuts through the basso profundo of both sides’ bombardments . The first of 60,000 men heave themselves, their half hundredweight packs, their rifles, wire cutters, spades and other kit over the parapets and out into no-man’s-land.
It is 6.30 am. Pipe Major Robert Mackenzie hears the whistles. He waits in the centre of the Borderers’ trench. He is 60 years old. At least 60 years old. Perhaps more. No-one knows for sure. He is a legend. He breathes deeply and blows hard into his chanter. Once, Twice. Again. The drones wake. He rises with the first men. Steps over parapet and into the open. His fingers pick out the tune. Men pass him and stride towards Mad Point. He is hit. He plays. He is hit. He plays and walks until bullet after bullet smashes his legs from under him. The German machine gunners are aiming at his pipes.  He stops. He can go no further. He is dragged back.
Pipe Major McKenzie’s wounds will kill him. He will be awarded the Victoria Cross.
***
The laconic battalion diary records those first moments like this:

“Battalion assaulted German trenches at MAD POINT & SE of MADAGASCAR trench at 6.30 am. The position was reached and at some points entered. Severe machine gun fire chiefly from flanks, undestroyed obstacles and uncertain effects of gas caused severe losses and prevented the attack from succeeding.”

***
The wire and the booby trap are holding up the men. Those behind, those in the second wave, catch up. They are bunched now, close to the wire. The German machine guns at Strong Point open up. Conan Doyle described it like this:

“Every accumulation of evil which can appall the stoutest heart was heaped upon this brigade … the gas hung thickly about the trenches, and all the troops … suffered from it … The chief cause of the slaughter, however, was the uncut wire, which held up the brigade while the German rifle and machine-gun fire shot them down in heaps.”

Some struggle back to their trenches. A handful. Nine officers remain of the 29 who began the day. Of the men, some 300 still stand of the 924 who stood-to just before dawn. Lance Corporal James Airton is not among those still standing. He is one of the 630 men killed, wounded, gassed or missing.
It begins to rain. Heavy rain.
***
There are no words. Or if there are, they are few.
Captain Stair Gillon, an officer of the King’s Own Scottish Borderers, had these a dozen years after that morning’s slaughter.

“It was all over in a few minutes. The wonderful product of months of zeal, energy, and patriotism was ‘knocked out’ without opportunity of doing more than set an example to posterity by their bravery.”