Leopards and spots and stuff ...

I don't follow Alastair Campbell (@campbellclaret - 214,999 followers) on Twitter.
But the other day, a friend told me I'd (@kjmarsh - 2,040 followers) been mentioned in one of his tweets ... so naturally, curiosity got the better of discrimination.
The last time I was aware of being on his radar was way back in 1997 and 1998.
First, when he tried to poison the waters around a job - editor of Today - that I hadn't even applied for. And then, at various parliamentary lobby briefings when he railed against me and the programme I was editing at the time, The World at One.
You can read all about all of that in Stumbling Over Truth, incidentally.
Anyway, this time it was all about Nick Robinson's excellent Battle for the Airwaves - his short series on Radio Four about the scuffles between the BBC and governments over the past 90 years. The edition that looked at the row over the 'sexed up' September 2002 dossier, Iraq's Weapons of Mass Destruction (sic).
Unsurprisingly, both Alastair Campbell and I featured in the programme. Unsurprisingly, too, our respective stances haven't changed much over the intervening decade.

But I had to smile when I read his tweet. It's not just our respective stances that haven't changed.
Campbell's uniquely polytropic verbal habits haven't, either.
F'rinstance, he tells his followers that I called Andrew Gilligan "journalistically criminal" in the programme.
Old tricks
That's not quite true. Though, unsurprisingly, it's close enough to confound all but the most attentive. An old trick. Leopards. Spots. Etc.
What I actually said was that "to misquote" and "misattribute ... one of the key claims" of "a single, anonymous source" was "journalistically criminal".
Gilligan's story, however, that Downing Street had "sexed up" the September 2002 dossier and that it made some in intelligence unhappy, was, as we now know for certain, wholly correct. Nothing criminal there ... well, not in putting the story on air.
We now know for certain, too, the truth of Dr Kelly's central allegation; that the notorious 45 minute claim was included in the dossier even though the best analytical brains in the intelligence community had warned it was almost certainly wrong. A warning that was over-ruled using intelligence from an untested source. Intelligence that was subsequently withdrawn.
Those brains were right and Downing Street was wrong ... unless I missed the haul of WMD finds from Saddam's "continuing" and "accelerating" production lines back in the day.
The journalistic criminality was Gilligan failure to report Dr Kelly's allegations accurately in one broadcast out of some dozen and a half on that one day in May 2003. The allegations themselves, however, were true.
As I wrote at the time, it was a case of "good journalism marred by flawed reporting".
In denial
Someone who does follow @campbellclaret is Mike Anson (@MikeAnson). He tweeted a response that "what Gilligan alleged was essentially correct".
Now, I've never been fond of that defence. As I said to Nick Robinson, "essentially correct" or "mostly right" isn't good enough. Not for the BBC and not when you have only a single, anonymous source.
The fact is, though, that but for one idiotic moment, Gilligan did report Dr Kelly accurately. And had he had the nous to report the allegations as he'd set them out and worded them in the script he'd written a few hours earlier, as he was meant to, he'd have spared us that idiotic moment and much else besides. 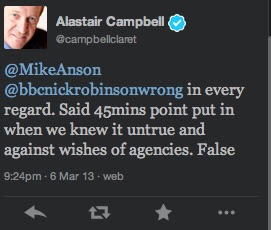 But Campbell remains in denial. "Wrong in every regard", he tweets.
Every regard?
Well, that's for others to judge. By and large those who care at all any more have made up their minds. Drilling down to what was actually said would bore even those with a PhD in Hutton Studies. And anyway, if you're minded to you can read it all in Stumbling Over Truth.
Suffice it to say, while all of the words in @campbellclaret's tweet were used by someone at some point in the whole affair, it wasn't necessarily in that order, all at the same time or all by the same person.
Pedants note, for instance, the word "agencies".
Bizarre
Most bizarre of all, though, is this little extract from the exchange with a politely persistent @MikeAnson. 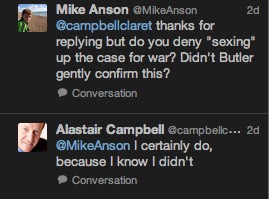 Mr Anson correctly reminds Alastair Campbell that Downing Street did "sex up" the case for war, the September 2002 dossier. Even Lord Hutton acknowledged that ... though you have to have a degree in interlinear reading to spot it. And so, of course, did Lord Butler ... rather more bluntly.
Does @campbellclaret?
Not quite.
Ten years late?
One thing, though, I would agree on.
It would have been better had I been able, ten years ago, to tell Lord Hutton how and why Gilligan had screwed up in one broadcast - but that his story was sound. The story I passed, the story written in his script, the story that time has shown to be spot on.
Only Lord Hutton knows why he didn't feel he needed to hear from the programme editor who put the allegations on air. Only the BBC knows why it didn't shove me into the witness box - but if you care at all, you can read why I believe they felt it better to silence me here.
It's baffling how @campbellclaret is still trying to persuade us, perhaps still believes himself, that if the BBC had apologised for the witless wording of one broadcast, it would have had to concede the story and Dr Kelly's allegations were wrong.
That would never have happened. And if anyone still believes the 'sexed up' dossier allegations were wrong ... well, they really are "10yrs too late".
at March 09, 2013 No comments: