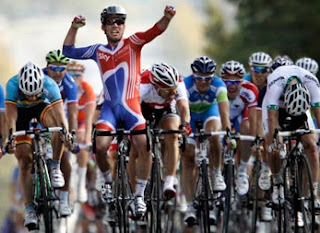 For those of us who wanted to see Mark Cavendish celebrate on the Mall, the brutal truth is that this became a race neither he nor Team GB could win.
Not because he wasn't the fastest sprinter in the race - he was - nor because they weren’t the strongest team, the “dream team” that Cav called them. They were.
They gave everything and they deserve every ounce of our respect, admiration and credit for that.
Nor was the race strategy necessarily wrong. Only a madman would try to out-think Dave Brailsford and his team and when Chris Froome said they did all they could, he was right.
They rode to perfection the only race that ever had any chance of delivering Cav to the place from where he’d be unbeatable in the sprint.

So what went wrong?

Every professional rider knows the race has a mind of its own. So do those of us who sit slumped on sofas watching otherwise inexplicable finishes in the Giro, the Tour or the Vuelta. And that mind isn't rational. It can be self-denying, self-destructive even. Perverse, petulant and peevish. Capable of swallowing up and setting at nought the efforts of the brave. And, sometimes, as determined to deny victory as it is to award it.
And so it turned out.
This was a denial of victory for Cav and Team GB, not a defeat.
Everyone said before the start that it was five riders against a hundred and forty. Or, realistically, Cav against all except his own team. And the simple fact is that none of the other teams with serious sprinters wanted to win as much as they wanted to Cav not to.

It was Team GB’s gamble that at least one of the Americans, Australians or, especially, the Germans had to be as determined to deliver their sprinter(s) to the front with 500 to go as they were determined to deliver Cav. They were wrong.
There were only ever two ways it could end - the good way and the bad way. And from Team GB's point of view, it turned out to be the bad way. Not with a sprint, set up by Bradley Wiggins' metronomic drumbeat, but with a breakaway that went out and stayed out. It’s the way the classics often end; remember Tom Boonen in this year’s Paris-Roubaix?
By the run into London and with the breakaway almost the size of the peloton, generating breakaways of its own, the game was up. And even when Cancellara rode himself into the barriers and out of the race, there were still the likes of Gilbert, Uran and the eventual winner Vinokurov with enough of the lone bolter’s temperament to go out and stay out.

On the day, Team GB lost it in the last two laps of Box Hill, in spite of - maybe even because of - their immense work rate. It was that work rate that persuaded the other sprinters' teams there was no point. It also made the breakways inevitable, breakaways with a lead, riders and size that mattered. It's the way the cunning and the strong but not so fast neutralise the brute force of the sprinters.
Actually, though, they lost it months back with the ‘deal’ effectively to swap Cav’s defence of his 2011 green jersey for Wiggo’s 2012 yellow. It seemed the dream deal, though it was never clear why the Sky Team needed Cav on the Tour - his three stage wins were impressive enough, though with a leadout train, it could easily have been six. Instead, he was part-time domestique and, astonishingly in one mountain stage, a paceman.
But once it was payback time and Team GB were saying out loud it was Cav or nothing, it was almost inevitable they'd be left with nothing.
The race didn't know what it did want, but it knew what it didn't. And the best way of not being hypnotised by the Wiggo metronome was to put a couple of kilometres between yourself and it. And keeping it there.
Cav or nothing meant Team Sky denied themselves the option of sending a rider up the road - and though David Millar had won a Tour stage just like that, the chances of him either controlling the breakway(s) or bringing a win that way were next to nil.
Frustrating, but it's what makes road racing the fascination it is. And why the best, quickest and strongest riders don't always win.