By the way, should you want to keep up with how the thinking is evolving in developing the publicly facing College of Journalism website ... take a look here. A working knowledge of Latin is helpful.
at January 13, 2009 3 comments: 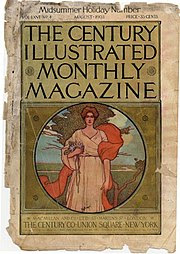 My daughter, Ellen, gave me a splendid Xmas present ... something she came across in one of the second-hand bookshop world's best kept secrets - the Oxfam shop in Turl Street in Oxford. It is a bound collection of The Century Magazine covering May to October 1895.
For those of you who haven't come across The Century Magazine, there's a brief Wikipedia entry here ... which hides as much as it reveals.
The first real thrill came when I opened the volume - it was presented to the writer, architect and gardener Walter Hindes Godfrey in February 1896 - when the young Godfrey was just 15 years old - for 'the best map of ancient Italy'. Godfrey is perhaps best known for his restoration of Herstmonceux. I am no great fan of Godfrey ... but there is something both thrilling and intriguing about knowing who owned a book before you.
The Century is described as a 'popular magazine' - which on the strength of its sales alone, it certainly was. And the style of much of its fiction certainly deserves that description. But in no other sense can the other meanings of 'popular' be ascribed to it. It is a dense read; its pages - 60 lines in two columns - are forbidding to modern eyes and as thickly textured as its illustrations, mostly drawings and engravings with the odd photograph, exemplifying the horror vacui of the time.
The Century was truly global in its subject matter - Napoleon Bonaparte coming high on the list with half a dozen articles during the six months or so of this collection ... presumably marking the centenary of his appointment as CiC of the French army, the event that began his rise to supreme power. There are articles on travels to the orient, the Balkans and England; on personalities; obituaries. And there is fiction. Oh yes, there is fiction - mostly written by apparently formidable women authors, much of it serialised, some of which, "An Errant Wooing" by Mrs Burton Harrison for example, yields nothing in emotional intensity to modern soaps.
But what is most wonderful about The Century Magazine from these latter years of the 19th century is that it clerks and logs the self-discovery of an America that was still bemused by its own existence. For many of the educated middle classes of New York and Boston, America was an un- or partially known presence. For those in late middle-age, the Civil War was a living memory and much of the West, though by the 1890s well-established states of the Union, remained more of an idea than a reality to many Americans on the Atlantic coast.
Unsurprisingly, then, there is much in the pages of The Century Magazine that feels like an exploration of the notion of 'homeland' ... in both fact and fiction. Stories are set on the transcontinental railroad, opened a generation earlier; folk festivals of rural America are studied and described. There is polemic against the tenement landlords of Manhattan who have to be forced to mend the foul drains that condemn their tenants to disease; and a consideration on the marriage prospects of college educated women.
If you want a flavour of The Century Magazine you can dip in here.