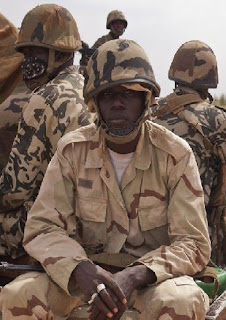 It's difficult not to draw easy parallels between the drift to serious involvement in Mali and the stampede to war in Afghanistan a dozen years ago.
The pace, of course, is different ... but many of the arguments are much the same and warrant serious attention.
Will they get that attention?
It all reminded me of the section of a book I contributed to a few years ago - it was a chapter about the limitations of journalism in analysing and explaining war. In particular, the limitations on front-line reporting.
But my argument was that there were many more reasons that Afghanistan became "An Unexamined War" - and those arguments seem to resonate today.
I've reproduced that section here - apologies for its length.

An Unexamined War
It is easy to forget how rapidly the bombardment and invasion of Afghanistan followed the attacks on New York and Washington on 11 September 2001 – and how unexamined, by politicians and media, was the case for and road to war.
From the moment the BBC’s Frank Gardner attributed the September 11 attacks to al Qaeda and Osama bin Laden, war in Afghanistan seemed inevitable. An inevitability that effectively silenced proper examination of the case for that war.
The bewilderment on the faces of western leaders as they heard the news – President Bush, you recall, was reading to schoolchildren when the news came through, and Prime Minister Blair, was about to address the TUC in Brighton – was more than just an expression of shock at the unspeakable atrocity.
It reflected, also, their certainty that ‘something must be done’ … but that, initially, they had very little idea what. There had to be retaliation, a strike back – but against who? When, why and to what end? They were far from clear.
Debate?
Three days after the attacks, on I4 September, British MPs were recalled to Westminster to meet in emergency session. There were many words but little debate. The then leader of the Liberal Democrats, Charles Kennedy, captured the prevailing sentiment  :


“It seems almost inevitable that there will be some sort of military response at some point—although at the moment we do not know where, when, or against whom.”


“ … these were attacks on the basic democratic values in which we all believe so passionately and on the civilised world ...
NATO has already … determined that this attack in America will be considered as an attack against the alliance as a whole. The UN Security Council on Wednesday passed a resolution which set out its readiness to take all necessary steps to combat terrorism. From Russia, China, the EU, from Arab states, Asia and the Americas, from every continent of the world, has come united condemnation. This solidarity must be maintained and translated into support for action.”

The contribution to this debate from newly elected, leader of Her Majesty’s Opposition, Iain Duncan Smith, could almost be described as fawning:


“ … the Prime Minister … is to be congratulated on responding to this crisis quickly and resolutely, and on giving a lead to other nations that value freedom and democracy.”

The forgotten dossier
Within three weeks, the government had produced a dossier, setting out the culpability of al Qaeda and Osama bin Laden as well as that of the Taleban regime in Afghanistan. A dossier on which Prime Minister Blair was able to lean when he told parliament, recalled for a second time on October 4, that the Taleban  :


" … allows them (al Qaeda and Osama bin Laden) to operate with impunity in pursuing their terrorist activity.”

How many of us remember that dossier? How many of us read it? How many of us gave it the scrutiny we gave to the Iraq dossiers – both the ‘sexed-up’ September 2002 dossier and the dodgy dossier of February 2003?
How many of us questioned, in the name of seeking ‘truth’, the simple choices Prime Minister Blair set out – as simple and unavoidable for the UK as they were for the Taleban?


“They either surrender the terrorists and close down the terrorist network or they become our enemies. If that happens, and the regime were to change, we are already working in close co-operation with people in and outside Afghanistan to build an alternative and successor regime that is as broad based as possible, unites ethnic groupings and gives people the chance of a stable Government there.”

The lack of parliamentary and media scrutiny created a silence in the discourse, filled only by the sound of John Stuart Mill turning in his grave: “Truth can only emerge from the clash of contrary opinions”.
Missed opportunities
Yet there was much we journalists could and should have scrutinised. The extent to which Britain’s haste ‘to take down the Taleban regime’ – the phrase that became common currency at the time – aligned itself with what we knew about Tony Blair’s declared principles of foreign intervention, for example.
Since 1997, Prime Minister Tony Blair had been straining both to define – and exercise – what had become known as ‘post-modern’ foreign policy – broadly, the criteria on which the UK might choose to project its power into another state to right those things which, according to British values, were wrongs.
The key text became known as ‘the Chicago speech’ and contained five defining tests:


“First, are we sure of our case? War is an imperfect instrument for righting humanitarian distress; but armed force is sometimes the only means of dealing with dictators. Second, have we exhausted all diplomatic options? We should always give peace every chance, as we have in the case of Kosovo. Third, on the basis of a practical assessment of the situation, are there military operations we can sensibly and prudently undertake? Fourth, are we prepared for the long term? In the past we talked too much of exit strategies. But having made a commitment we cannot simply walk away once the fight is over; better to stay with moderate numbers of troops than return for repeat performances with large numbers. And finally, do we have national interests involved?”

It was a clever speech that appeared to establish Britain as a kind of global ‘values policeman’ – the five criteria were calculated to justify interventions in Sierra Leone and Kosovo, for example. In fact, of course, it was a delimitation of intervention abroad, blinding the eye turned towards Saudi Arabia or China, for example, where, by any rational assessment, British values were affronted daily – the “sensibly and prudently” escape clause.
The new paradigm
The unexamined rush to war in Afghanistan blew those limitations away, arguably shaping the paradigm by which Britain became entangled in President Bush’s crusade in Iraq. And in telling that ‘truth’ about Afghanistan, journalism failed.
Chicago said nothing about regime change; nothing about de-failing failed states; nothing about assuring the safety of British streets by fighting in foreign fields.
In an April 2010 article (The Maps are Too Small, Patrick Porter, RIIA April 2010) for the Royal Institute of International Affairs – Chatham House – Patrick Porter of King’s College, London, summarised where Britain’s foreign policy stood after Afghanistan.
Porter’s article is as potent a condemnation of journalism’s failure as it is of Britain’s loss of focus in Afghanistan and after. The Blair/Brown administration, Porter argues, has become hyperactive on the world stage because :


“… it claims the country’s security depends on a liberal, ‘rules based’ world order that upholds its values … Britain is endangered by globe-girdling, chaotic processes such as state failure. Broken countries are incubators of extremism, disease and crime.”

Britain has found itself committed to de-failing failed states and doing so in a way that is consistent with Britain’s liberal values:


“It cannot tolerate the illiberal. Therefore, London must scan the far horizons and take a forward leaning posture, watching, engaging and intervening on the periphery to protect its core.”

This is true of nowhere more than it is of Afghanistan. There we see for real what an open-ended, bottomless, interminable – choose your term of infinity as you will – policy of intervention leads to.
Missing pieces
After almost nine years in which British men and women have been fighting and dying in Afghanistan– twice the length of WWII – the average British newspaper reader or the average British TV news bulletin viewer might well ask whether we journalists have helped locate the “missing pieces”.
Can we journalists hold our hands on our hearts and say that we have done all that we could to hold our government properly to account for its expenditure of our ‘blood and treasure’ on a policy in Afghanistan that is maximally interventionist (overturning one regime and putting another in its place) value driven (towards a multi-ethnic plural democracy) and, in its logic (the safety of British streets is secured on the battlefields of Afghanistan) capable of application anywhere on the globe where states fail?
And if we have not done so – and this is crucial – has that failure been the result of constraints on reporting from the front line? Or has it been the result of something else?